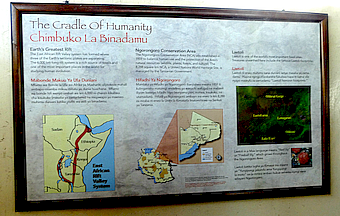 The Ngorongoro Conservation Area extends from the 1050 m high shoreline of Lake Eyasi to the 3648 m high Mt. Lolmalasin. The grandiose landscape ranges from the eastern savannahs of the Serengeti to shifting dunes, deep gorges, swamps, waterfalls, giant craters, volcanic mountains, montane primeval forests and a green high savannah. In the game reserve with national park status live approx. 56000 Massai almost in harmony with the East African fauna. The respectful coexistence of man and animal is unique in the world. 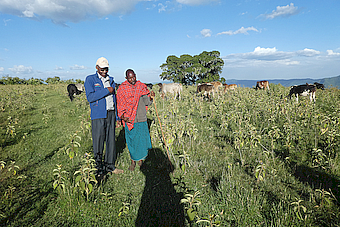 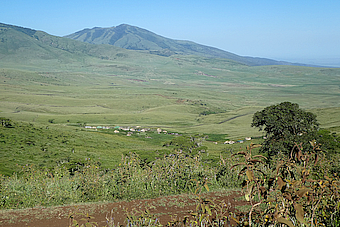 The 16 x 20 km Ngorongoro crater lies in the centre of the highlands. The largest unfilled caldera in the world. The crater is almost 600 m deep, the crater rim lies on average on about 2300 m height.

In the Ngorongoro crater is gathered everything that has rank and name under the wild animals of East Africa. Except Maasai giraffes, topis and impalas, which do not get over the steep crater walls. Depending on the season one counts 15000 to 25000 animals. More than two thirds of them are wildebeests, zebras, buffaloes and gazelles. This large number of grass eaters in a small area causes the large population of Ngorongoro lions and makes the crater one of the most densely populated lion areas in Africa. 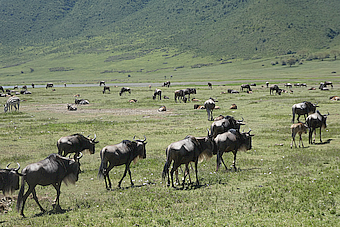 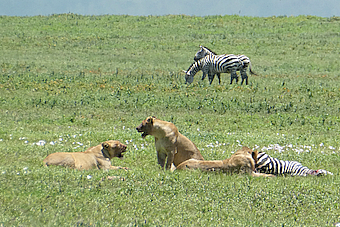 Its own microcosm has the landscape at the bottom of the crater. The only about one meter deep Lake Magadi forms the heart of this landscape. The soda-rich water of the lake is the food source of a variety of flamingos. 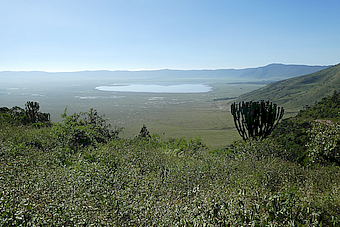 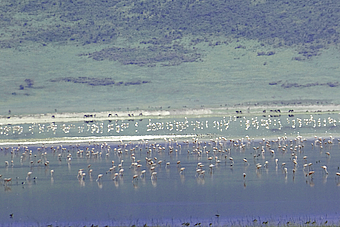 The large forest area of the Lerai Forest extends to the south of the crater and merges into other hippo pools.There is also a picnic area. 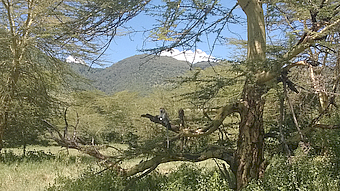 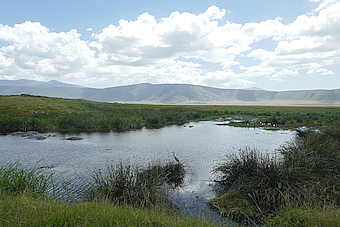 The genesis of the crater highlands goes back over 15 million years. When the great rift in the continent arose, which formed today's Rift Valley, huge volcanoes piled up. At their outbursts they covered the surrounding area with mighty lava strata. The East African Rift Valley is a source of human history for scientists. The 55km long Gorge of Oldupai marks the end of this prehistoric line. The seasonally flowing Oldupai River has created a ditch that is up to 100 meters deep over thousands of years. 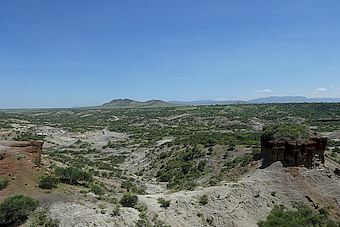 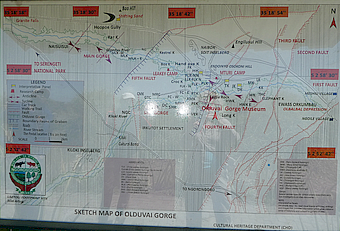 On July 17, 1959 Mary Leakey found a half skull of a over 2 million year old human of the genus Australopithecus and 2 years later a homo Habilis. This sparked a new run in the search of the cradle of humanity throughout the East African Rift Valley.

In 1978, Mary Leakey made another spectacular find with the discovery of the Laetoli Footprints about 40 km south of Oldupai. The footprints of three pre-human of the genus Australopthecus afarensis were dated to 3.7 million years.

The three pre-human went over a not completely cooled ash layer after the outbreak of today extinct Makarot volcano. The sun was burning in their imprints. A short time later, another eruption again covered the landscape with volcanic ash. As a result, the footprints have been preserved to the present day. Unfortunately, they had to be covered again as winds began to erode them. A museum house with airtight glass box is planned. 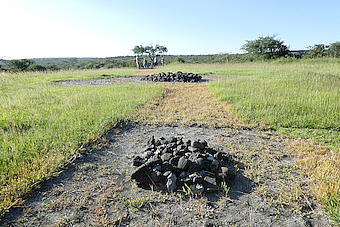 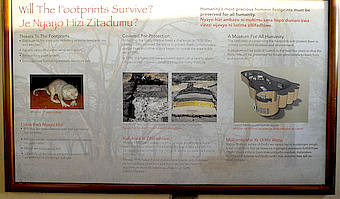 Shifting Sands is a cluster of volcanic ash dust. The about 50 m long and about 5 m high dune was blown here after the outbreaks of 60 km away Ol Doinyo Lengai.Due to the constant east wind, the sickle-shaped dune migrates on average 17 m per year to the west. 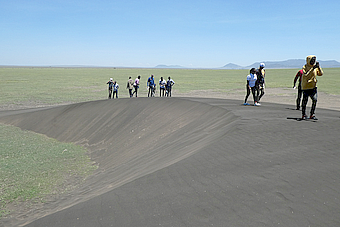 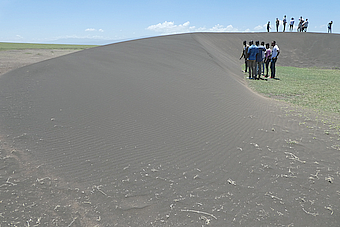